It's not all fun and games. 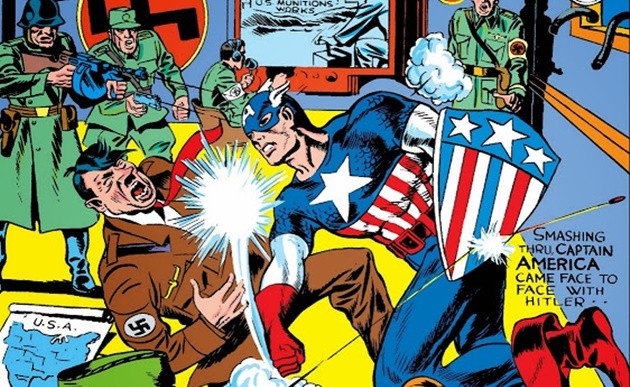 Now that it’s mid June, everyone who keeps in touch with comic books knows about the little “surprise” that was waiting at the end of the new Captain America: Steve Rogers #1 (2016) that was released in May. The recently de-aged, all-American super soldier Steve Rogers (you know, the guy in the spangles) is now a member of Marvel’s pseudo-Nazi organization, Hydra – or, I should say, has always been a member of Hydra. In a few panels, the issue rewrote Rogers’ history: his mother, a Hydra agent herself, indoctrinated him as a young boy, and he’s been working as a sleeper cell for the Red Skull and co. since…forever, apparently. No gimmicks. No mind control. No Skrulls. And everyone is excited to see where this story is going to go, right? It’s shaking things up, so it’s going to be amazing…right?

Not exactly. A chorus of resounding “No’s” can be heard from the audience; comic readers, movie goers, and young fans of Captain America everywhere are disgusted by Marvel’s revelation – and I’m not particularly surprised as to why. Steve Rogers was created by two of the most significant writers Marvel has ever had, and he was specifically meant to represent hope for Jewish survival during the atrocities of World War II. He embodies what Americans hope is a trademarked fight for freedom. This revision of his character history has re-written him to be the antithesis of what he’s been known to stand in opposition to for all 75 years of his existence: Hitler, and, more broadly, Nazism and the ideologies inspired thereafter.

I think that Steve Rogers’ position as the moral foil to the aforementioned ideologies, Hydra included, has safely become common pop cultural knowledge. I think that there’s also a general consensus that any permutation of Nazism – Nazis, neo-Nazis, fake Nazis like Hydra, etc. – is decidedly Not Good. There are many people who consider the Holocaust to be the single worst thing that has ever been done by people to other people, and, even if you don’t agree with that, it’s difficult to contest the evil that the Nazis wrought upon the world.

Now, with all of that in mind, it isn’t difficult to imagine the outrage that erupted in response to the Hydra Rogers scoop. However, as someone who is not Jewish, it’s not really my place to enter the conversation about the disrespect Marvel is showing survivors of the Holocaust –smarter and better paid folks like Jessica Plummer have already done an excellent job of exploring the nuances of this immense transgression on the part of the comics giant.

Amidst this ocean of dissent, the bulk of discussion has centered around what Plummer discusses in her article, but I think this news has more at stake than just damning irreverence for Captain America’s legacy. What I’m missing from the conversation that’s sprung up about Captain Hydra is a long, hard look at the retcon (or, in non-comic language, revision) itself. Nick Spencer, writer for Captain America: Steve Rogers #1, claims in an interview with Entertainment Weekly that he and his team wanted to reinvigorate Rogers and explore his character after an extreme shift in allegiance. In Spencer’s words, this narrative decision was “obvious straight away. “ He has no qualms about the direction he’s taking the character in, and believes that the retcon will provide valuable insight into the character and shake up the dynamics of the universe – and that’s what has me fuming. Spencer’s faith in the benefit of his revision is ground zero for all of this.

Everyone has heard the adage of history being written by the victors, and logic follows that everyone else, i.e. the “losers”, doesn’t get a voice in the banks of recorded history. The revising of history, fictional or otherwise, enables us to uncover those narratives that haven’t been allowed to exist because of the representative prejudices of their times. We’re able to take disenfranchised people and characters (read: women, people of color, etc), reveal the lives that weren’t possible during their incarnation, and explore their insights as now fully realized individuals.

I would argue that making Captain America into a pseudo-Nazi is not a productive use of the very precious tool of revision.   What insight does Nick Spencer think a Captain Hydra can offer to his readers? Are there people out there begging for a glimpse into the fictional mind of a fictional Nazi? Have Nazis and neo-Nazis become a demographic important enough in the world that they deserve to be given representation alongside minorities? Or is this just lazy, tone-deaf storytelling on the part of Spencer and his editors?

This line of inquiry keeps taking me to the same big question: What is the point of this? Why did Marvel go through the trouble of overhauling a beloved, salt-of-the-earth superhero if they were going to spit him back out with nothing more than an upsetting change in allegiance? Ultimately, these questions lead to a conversation of representation in this kind of media. There is plenty of data highlighting the imbalanced representation in the film industry where straight white men are represented in an overwhelming majority. When gatekeepers (the people or companies with the power to influence the literal faces of their characters and actors) continue to make “changes” that just give you more of the same, it gets stale. We aren’t increasing the visibility of anyone – white men are still the most visible (as in are represented the most often and with the most depth). They almost can’t become more visible than they already are. Taking Cap and making him Hydra is a pointlessly lateral movement – he doesn’t add diversity, but he doesn’t really take any away, either. It’s stagnant storytelling.

But Marvel is capable of positive movements towards diversity. Last year, they gave us a new Thor book – but Thor was a woman. She wasn’t “Lady Thor” or “Thorette.” She was The Mighty Thor, worthy of wielding Mjolnir and wearing the cape and breastplate. And that’s what I mean by positive movements; we take a group of people (in this case, women) that have lower visibility than straight white men and we give them a main character. And, unlike with Hydra Rogers, this Thor has a constructive story to tell because of how severely the female perspective is neglected in fiction. She’s advantageous without feeling gratuitous. Marvel is, however, also capable of backwards movements. Tilda Swinton, a very white lady, was recently cast as The Ancient One in the upcoming Doctor Strange movie. Traditionally, as in during the entire history of Doctor Strange, The Ancient One has been Asian (and specifically Tibetan). Asians are the second most underrepresented group in film, and taking a rare Asian role and giving it to a white lady? That’s backwards movement, and the film is going to be less diverse (and probably more Orientalist) for it.

Some parts of comic fandom are staunchly determined to resist any and all kinds of diversity, especially when it takes the form of retconning existing characters to make them more representative of the world at large. The attitude is “they belong to us, make your own characters instead of trying to change ours”. Again, history is inherently biased towards the power structures involved at the time of its encoding, and treating it as something immutable denies the voices of those who are mistreated by it.  That mentality says that history is sacred, and that minorities aren’t allowed to touch – they’re only allowed to look wistfully at the past and image what it would be like to be represented in it. Yes, in their initial creation, a lot of comic book heroes were targeted towards their white male readership. I won’t contest that. But it isn’t the 80s anymore, and the composition of comic book readers and moviegoers is drastically changing – The Guardian’s bit about the increasing number of female comic book readers can attest to that. People from every walk of life are reading comics and watching their film adaptations, and attempting to prevent sometimes necessary revisions from happening because of the “sanctity” of a character fractures fandom and creates a “separate but equal” dynamic therein.

We need to be able to modernize Blaxploitation, Orientalist, and racist characters while also creating new characters that reflect the diverse world we currently live in. Comics aren’t sacred just because they’re old; history is not a possession, and it’s the responsibility of us in the present to ensure that our revisions to those histories accommodate changes in our social climate. The call for revisions forces us to engage with the limitations of a whitewashed and prejudiced past; thoughtful execution of those changes is how we answer that call. It may smart a bit for the people who feel they’re having things taken from them, but I’ll be bold and say that inclusivity and the visibility of minorities trumps a baseless sense of entitlement.

There was buzz recently surrounding the casting of the lead in Netflix’s Iron Fist (to be announced). Unsurprisingly, they remained true to the origins of the comics and cast a white guy. Not many people were surprised, but a lot were disappointed – USA Today has a really excellent article covering the whole thing. And, consequently, a conversation stirred up about cultural appropriation – chiefly what the difference is between cultural appropriation and character revision. I would argue first by saying that culture and history are not the same thing. When we say history, we mean recorded and acknowledged history: textbooks, biographies, the stories that we’re told about people, and the things that we remember. It’s an intangible, subjective record of what happens to us every day, and, as such, it’s subject to the whim of dominant power structures. When we talk about culture, we’re talking about things like food, religion, clothing, and rituals. Those things distinctly belong to people. People possess their cultural artifacts and their identities, and while culture and history interface endlessly in our day to day, they are not the same thing. Thus: Iron Fist is a culturally appropriative character. He adopts certain aspects of a vaguely Asian culture but retains his white identity. He just dabbles in esoteric Asian stuff so he can be a hero (or vigilante, depending on who is writing him), and we get to hear his white guy perspective on it all. Captain Hydra is an example of revised history because his entire character has undergone an overhaul – it’s disrespectful in every sense of the word, but it isn’t cultural appropriation because Nazism isn’t a culture.

I’ve been accused of asking Marvel to pander to particular groups of fans, and that really isn’t what I’m asking. I think it’s fair to expect that, in 2016, we don’t turn American heroes into Nazis a month after Holocaust Remembrance Day. I think it’s more than fair to ask that we – and I mean we non-white, sometimes non-men people – be acknowledged in the fictional universes that we love. I don’t think that’s pandering, but I do find it troubling that moves towards diversity seem to be more and more difficult for studios like Marvel to accomplish these days. I think the way to foster accountability is to look past sensationalism and think long and hard about what exactly they’re doing. We can get lost in the fog of anger (I’m still not over Miles Morales not being Spider-Man in Captain America: Civil War {2016}), but we have to remember to clear our heads and get to the bottom of things. Marvel and their contemporaries need to know that we’re paying attention.